Tom Neave is the 2021 Pirelli National Superstock Champion, after what has been an amazing season for the Lincolnshire-rider with the Honda Racing UK team. Wrapping up the championship on Sunday at the final round at Brands Hatch, it’s Tom’s first National championship win in the BSB series.

Going into the final round Tom had a 22-point advantage over his rivals and with one race at the Kent track to decide the title, it went down to the wire. Needing only four points in order to win the championship, Tom had the upper-hand, irrelevant if his rivals Billy McConnell or Alex Olsen had won the race.

Qualifying down in 19th place after mixed conditions on Saturday hampered his progress, Tom had some work to do with Billy in fourth and Alex 14th. However off the line Tom got his head down and by the seventh lap he was up in 13th place. Meanwhile up ahead, Billy had taken the lead and the pair were tied on points in the championship fight.

Keeping out of trouble, Tom rode carefully to keep pushing up through the pack, lap by lap he progressed and on the final lap he was ninth, meaning if nothing went wrong in the final moments, he was the 2021 champion. With the team busy preparing for the celebrations back at the garage, Tom was still hard at it on track and eventually crossed the line in eighth place, and as the 2021 Pirelli National Superstock Champion.

This season hasn’t been plain sailing for Tom; it was a difficult start plagued with injury and illness, but Tom’s luck turned around at the fourth round at Thruxton where he landed his first podium of the year in third place.

Next up was Donington Park’s National Circuit, and a happy hunting ground for both Tom and the Fireblade SP. Initially winning the opening race, the result was revoked after he passed Luke Mossey under a yellow flag and he was demoted to second, but with another race on the Sunday Tom was determined to take his first win of the 2021 season.

Winning the second race at Donington Park, Tom’s winning streak had begun as he took three from three over the next few rounds, following the victory at Donington with wins at Snetterton and Cadwell Park, where in front of his and the teams’ home crowd he claimed Pole Position with an incredible time of 1:27.656 – the fastest ever lap of Cadwell Park on a Superstock machine.

Leading the championship from round six, a consistent point-scoring season followed, where not losing his championship lead Tom arrived at Round 11, the final, 22 points ahead having racked up three wins, two second places and two third places over the 2021 season.

Race: 8th
“It’s an absolute dream come true, it’s not just a championship for me, but it’s a championship for the whole team, all my crew, everyone who’s supported me and got behind me – it’s been a hell of a year and the best season to win the title in, I’m not just saying that as I’ve won this year, it’s been unreal, the riders and the depth of field. I’m so grateful to Honda for giving me this opportunity three years ago when I wasn’t too proven, so the championship is for them and I cannot wait to see what the future holds.” 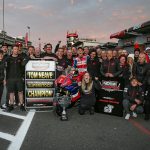 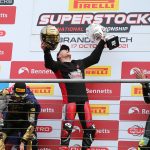 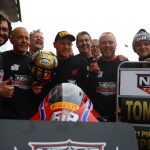 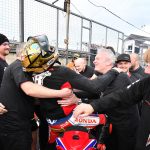 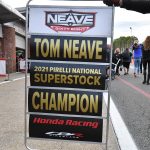 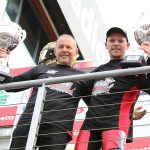