The penultimate round of the Pirelli National Superstock Championship at Donington Park was a weekend of mixed conditions at the GP circuit, where after a thrilling third place in the final outing of the weekend, Tom Neave maintains his lead in the championship by 22 points.

Heading into the weekend Tom was confident having enjoyed success at both the National and GP layouts in the past aboard his Fireblade machine. But with treacherous weather conditions forecast for the weekend it was all to play for.

Friday’s combined practice times saw Tom fifth fastest on the times on a dry track, but Saturday’s schedule was disrupted with heavy rain, causing the day’s events to be brought forward. In Qualifying Tom was seventh fastest, but with conditions worsening throughout the morning, the race was declared wet.

Across the 12-lap race Tom was cautious, knowing that a DNF could hamper his chance at the championship, so playing a safe game he came home 11th, not the result he wanted for Race 1, but it was further important points added to his tally.

Sunday’s race was a stark contrast to the previous day with blue skies, but high winds at Donington Park. Tom’s grid position for the second race was decided on his fastest lap in Saturday’s race and with it being wet conditions, he lined up 12th on the grid.

Determined to make amends for the previous day, Tom came home in third place after what was a nail biting race. Riding smart and getting his head down early it wasn’t long before he was in the battle for fourth place. Shaking off challenges from Chrissy Rouse and Fraser Rogers, he broke free and started to hunt down Davey Todd in third.

Making a pass on Davey, Tom slotted into the final podium spot and up ahead in second place was title rival Billy McConnell. Tom knew if he finished second in the race and ahead of Billy, the championship would have been his, but despite giving it his best shot, Tom crossed the line third, 1.757 seconds shy of Billy.

The title fight will now go to the grand finale at Brands Hatch on 15-17 October, where Tom has a 22-point lead on Billy, and 23 points on Alex Olsen, where all eyes will be on the Pirelli National Superstock Championship battle.

Race 1: 11th | Race 2: 3rd
After Saturday’s result it’s good to turn it around to have a solid result and an awesome battle! When you have a race like that it doesn’t always matter where you finish, it’s just a fun position to be in. I gave it all I could and left nothing on the table. We were so close to being able to wrap the championship up if we had finished second we’d have won the championship, but after the performance in Race 1 it was just good to put a solid race together again. I probably spent too long battling for fourth/fifth place, so to break free and come back at the end showed I had my head on and I wanted it. Although we’re taking the championship to Brands, we don’t have much to do, so fingers crossed we can do the business there! 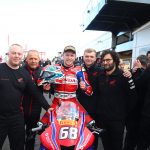 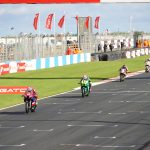 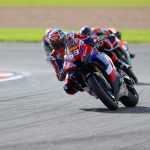 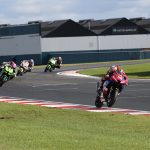 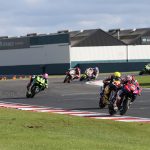 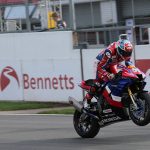