Tom Neave enjoyed a solid weekend at Oulton Park for the ninth round of the Pirelli National Superstock Championship, scoring valuable points to keep him in championship contention with a 20-point lead and just three races remaining of the 2021 season.

The weekend started out mixed for Tom, who placed 11th fastest in the opening combined practice times and it’s also where he qualified for Saturday’s first Superstock race.

Knowing there was some work to do to move further up the field to maximise on race points over the 14-lap race, Tom was on a mission from as soon as the lights went out. Fighting hard and with great pace he made his way into fourth at one point, but during the closing stages dropped back to sixth where he crossed the line to add 10 points to his tally.

Lining up seventh on the grid for Sunday’s 12-lap race and having made some set-up changes to his Fireblade machine overnight, Tom was determined to have a good result. Working his way through the pack he had made his way into fourth place and set about tracking down Fraser Rogers in third. Unable to bridge the gap to third, he crossed the line fourth, adding crucial points to his haul, where he’s now 20 points ahead, with Alex Olsen sitting second and Billy McConnell third in the standings.

The next and penultimate round of the series takes place this weekend (1-3 October) at Donington Park, where last season Tom took a win and a third place finish on the GP circuit, something he’s keen to repeat at Round 10.

Race 1: 6th | Race 2: 4th
“That was the best fourth place I’ve ever had racing! We lost some points on Saturday, so to pull some back at this stage in the championship, and at one of my tricky tracks is just such a good result. We got the Fireblade working better and better across the weekend, and I honestly felt like I had good pace and could have fought for the podium if I hadn’t mucked up the middle part of the race. Overall, I’m really happy with the results and we’re now going to my favourite circuit this weekend, so happy days!” 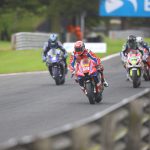 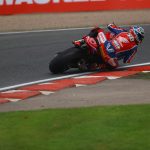 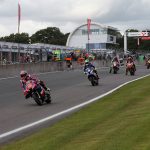 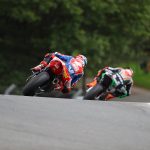