Snetterton in Norfolk was the venue for the seventh round of the Pirelli National Superstock Championship, where Tom Neave dominated across the whole weekend to further extend his championship lead.

Heading into the weekend the Lincolnshire-rider was feeling confident after winning at the 2.69-mile circuit at last year’s event aboard his Honda machine. Topping Friday’s free practice, Tom went into Saturday’s qualifying as the man to beat.

Setting a blistering qualifying lap time of 1:49.078, which was under the current lap record, Tom claimed his second consecutive Pole Position ahead of Sunday’s race, 0.210 seconds ahead of his championship rival Alex Olsen.

For Sunday’s 12-lap Superstock race, conditions at the Norfolk circuit were ideal with blue skies and sunshine. Lining up in Pole Position Tom had a fantastic start off the line and although momentarily dropping back, by the fourth turn he had regained the lead.

Holding off his Superstock rivals, Tom had at one point over a three-second gap between him and Taylor Mackenzie in second. Smashing the outright Superstock lap record not once, but twice during the race, Tom holds the new lap record of 1:49.516 at the Snetterton 300 circuit.

Managing to keep a strong gap throughout the race, Tom comfortably crossed the line 2.084 seconds ahead of Taylor Mackenzie to make it three race wins in a row. The result from the weekend sees Tom extend his championship lead by 24 points, ahead of the next round at Silverstone.

The next round of the Championship takes place this coming weekend (10-12 September) at Silverstone’s National Circuit, where last year Tom took the first race win and was third in Race 2.

Race: 1st
“That was probably the best fun I’ve had on a bike all year, normally you only pull point-one of a second each lap, but as soon as I got that two second lead on lap four or five, I enjoyed riding the Fireblade and hitting my points. Everything was working great, and I just reminded myself why I love racing bikes and why I do this. We knew coming into the weekend we can be strong here, we won here last year and we’re on a winning streak at the moment. You do put pressure on yourself and my rivals have been with me all weekend, so I’ve had to be on my A-game, but to pull it off in that style is exactly how I wanted to win!” 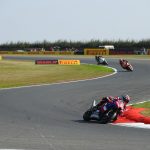 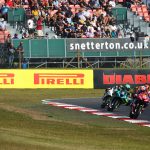 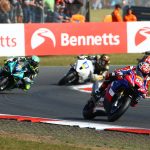 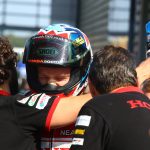 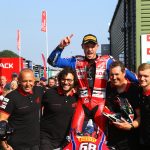 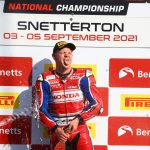