With the results from last year’s round fresh in his mind, Tom came into the fifth round of the series confident for a strong weekend to enhance his championship challenge. Third overall after Friday’s combined practice, Tom went into Saturday’s Qualifying taking his first pole position of the 2021 season.

Although crossing the line ahead of Luke Mossey in the weekend’s first race, Tom had passed Mossey when he ran wide, but an announcement from race direction stated that his move was performed under yellow flag conditions and Tom was therefore demoted to second place, behind Mossey.

Having scored the fastest lap in Race 1, Tom was on pole again for the second race of the weekend and with Saturday’s race hit with a penalty, the Honda-man was ready to fight and take the win.

Getting the holeshot and dominating the race from start to finish, Tom was able to break away from the chasing group and was left unchallenged across the 20 laps to cross the line 2.678 seconds ahead of second-place finisher Luke Mossey. The results from the weekend see Tom jump into second place in the overall standings, with 113 points, joint with current series leader Alex Olsen.

The next round of the series takes place this weekend (20-22 August), at Tom’s home round Cadwell Park in Lincolnshire, where racing returns after a two-year break following the pandemic.

Race 1: 2nd  |  Race 2: 1st
“After what happened in Saturday’s race it made me more determined for the win, on paper I won that race, I rode my heart out and I was gutted to have it taken away from me. To lead the second race from the first corner to the chequered flag was the perfect way to end the weekend and prove that I deserved to win. We’re joint first in the championship now with points, which I never expected coming into the weekend 37 points down. We head to Cadwell Park now, which is my home round and I know we can have a really strong weekend. This is a turning point for my championship hopes and I hope we can keep this good momentum going.” 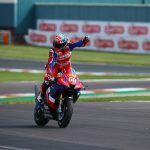 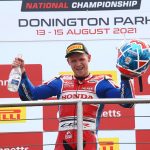 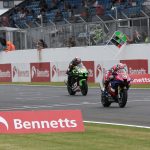 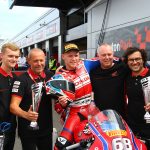 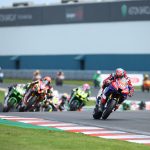