Round 2 of the Pirelli National Superstock Championship proved a happy hunting ground for Tom Neave, who bolstered his championship challenge with two solid results, leaving Knockhill seventh overall in the series standings.

Arriving at the Scottish circuit, Tom had zero points after crashing out of the race at the opening round, but with Knockhill being a circuit the Lincolnshire-lad enjoys he was determined to make amends and get his championship back on course.

With a shortened two-day event format due to current restrictions in Scotland, it was a busy weekend getting everything ready for Sunday’s two races. Leading Honda’s charge across the weekend, Tom was never outside the top-10 aboard his Fireblade SP and was eighth fastest on the combined practice times.

During Qualifying, Tom was sitting third and it looked like a front row start for the race was on the cards, but with the weather looking like it was going to change and a threat of rain in the Scottish air, Tom decided to play it safe and not risk going back out. Pushed back to sixth in the final stages he was on the second row of the grid for Race 1.

For the first 25-lap Superstock race Tom dropped places in the early stages having made a small mistake exiting turn six. With the mistake not phasing him, Tom set about chasing down his rivals and quickly made up the lost places. The final stages of the race saw Tom involved in the battle for fourth place with Lewis Rollo, and his brother Tim. Making a smart, calculated move at the final corner on the last lap, Tom cut underneath Lewis taking the chequered flag in fourth place.

On a high note from the result in Race 1, Tom was hopeful for another solid result in the second Superstock instalment. Starting from fifth on the grid the Honda-man got beaten up and was pushed back to tenth as the race got underway. With some work to do ahead of him, Tom got his head down and started moving back up the pack, eventually coming home fifth.

With solid results from the two races, Tom collected 24 points which sees him seventh overall in the Pirelli National Superstock Championship standings, 32 points shy of current series leader Billy McConnell. Tom will now have a short break before Round 3, where the series heads South to Brands Hatch in Kent on 23/24/25 July.

“You always want to finish at the top in a race, or at least be on the podium, but I did what I came to do this weekend and that was to finish both races and get some solid points. For the most part this weekend we went faster in each session and just continued to understand the Fireblade a bit more. I can go home happy and relax, we came into the weekend with zero points and now we’re seventh in the standings. I’m still getting over an illness and also recovering with my knee, so things still aren’t 100% perfect. It’s a long season and there’s so much more we can do, so we’ll keep at it and keep playing the long game.” 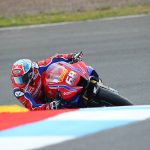 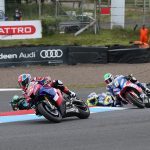 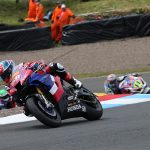 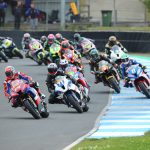