Round 1 of the 2021 Pirelli National Superstock Championship got underway last weekend at Oulton Park, which was a bittersweet outing for last year’s runner-up Tom Neave who crashed out of Sunday’s race.

Oulton Park is a track that plagued Tom and the Honda Racing UK team last year in terms of the set-up of the Fireblade SP, due to its physical layout. However, over the winter the team has worked hard and huge improvements were seen across Tom’s lap times across the weekend.

In practice, Tom was seventh overall in the times and in Saturday’s qualifying the Lincolnshire-rider posted the sixth fastest overall time (1:37.085), shaving 1.5 seconds off his lap time in 2020 when he qualified 16th.

Coming into Sunday’s 14-lap race, Tom was feeling positive with the lap times and the progression made throughout the weekend. Making his way through the pack from his sixth place start, Tom had moved into fourth place and was starting to track down Billy McConnell in third place.

Posting his fastest time of the weekend during the race (1:36.870) a podium spot was looking possible as he continued to track Billy down. Sadly, while chasing that elusive Oulton Park podium Tom crashed out of the race at Lodge, thankfully unhurt from the fall.

Although not finishing the race Tom is taking a lot of positives from the weekend as his lap times and pace had improved dramatically since 2020, where he finished both races in tenth place. To be in podium contention at a circuit he previously struggled at bodes well for when the team return later in the year.

Tom and Honda Racing UK will now prepare and set their sights on the second round of the championship at Knockhill, a circuit Tom enjoys and during a recent test at the Scottish circuit is one that suits the Fireblade SP. Due to current restrictions Round 2 will run as a two-day event format from Saturday 10 to Sunday 11 July.

Race: DNF
“It has been a bittersweet weekend. We have improved on every aspect from last year and I felt comfortable on the Fireblade. However, the biggest problem this weekend has been away from the bike and with me with a lack of energy and focus due to a recent illness which I have recovered from now, but I’m still suffering with energy levels. I knew this weekend was going to be a challenge, but I gave it my all and my times improved massively, and in the race, we were definitely in the fight for a podium spot until I crashed out. We’re now heading to Knockhill which is a circuit I love, and we had a successful test there a few weeks back. I want to say a massive thank you to the team for all their hard work, it’s so good to be back in the swing of things, it’s a long season where anything can happen, so roll on Round 2!” 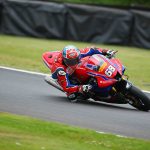 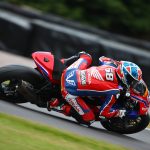 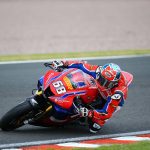 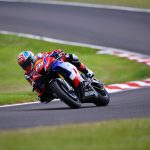